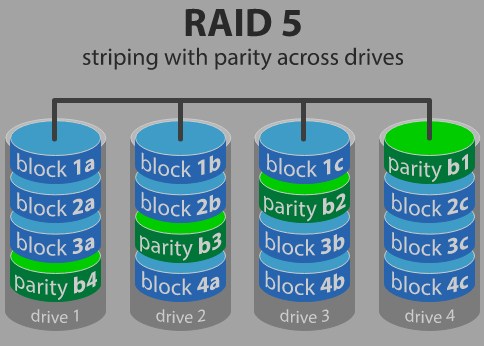 This article is for system administrators and storage engineers who want to understand how different RAID levels impact data distribution and recovery.

RAID 0 is the most basic level of RAID and provides no protection against data loss. If one drive in a RAID 0 array fails, all data on the array is lost. However, RAID 0 offers the best performance of all the RAID levels.

Data is distributed evenly across all drives in a RAID 0 array. This provides the best performance but also the highest risk of data loss. If one drive fails, all data on the array is lost.

RAID 0 is a good choice for applications that require high performance but do not need data protection. Examples include media streaming, video editing, and gaming.

RAID 1 is a data storage virtualization technology that combines multiple physical disk drive components into a single logical unit for the purposes of data redundancy, performance improvement, or both.

When data is written to a RAID 1 volume, it is duplicated across all of the drives in the array. This provides protection against data loss if one of the drives fails. The failed drive can then be replaced with a new one and the data will be rebuilt on the new drive.

RAID 1 can be used with either hard disk drives (HDDs) or solid state drives (SSDs).

The main advantage of RAID 1 is its data redundancy. If one drive fails, the data is still accessible from the other drive. This makes it ideal for mission-critical applications where data availability is paramount.

The main disadvantage of RAID 1 is its cost. Since data is duplicated across all drives in the array, you need twice as many drives to create a RAID 1 array compared to a single drive. This can make RAID 1 arrays quite expensive to build and maintain.

When it comes to data distribution and recovery, RAID 5 is one of the most popular levels. This is because RAID 5 offers a good balance between performance and security. With RAID 5, your data is distributed across all the drives in the array. This means that if one drive fails, your data is still safe on the other drives.

RAID 5 also offers good recovery times. This is because the data is parity-checked, so it can be recovered even if one drive fails.

However, there are some things to keep in mind with RAID 5. First, you need at least three drives to create a RAID 5 array. Second, the more drives you have in your array, the longer it will take to recover your data if one drive fails.

Overall, RAID 5 is a good choice for those who want a balance between performance and security. Just remember to have at least three drives in your array!

RAID 6 is a type of RAID that uses two parity blocks, which provides redundancy in the event of a double disk failure. This makes RAID 6 more resilient than other RAID levels, but it also has some drawbacks.

One issue with RAID 6 is that data distribution can be uneven. This is because the parity information is spread across all of the disks in the array, not just two disks. This can lead to hot spots, where one or more disks are being accessed more frequently than others.

RAID 6 also has a higher write penalty than other RAID levels. This is because when data is written to a RAID 6 array, the parity information must be updated on all of the disks in the array. This takes longer than writing to a RAID 5 array, for example.

Overall, RAID 6 is a good choice for storage arrays that need to be highly resilient. However, it’s important to keep in mind the issues with data distribution and write performance.

How to choose the right RAID level

When it comes to setting up a RAID system, one of the most important decisions you’ll have to make is which RAID level to use. There are a number of different RAID levels available, each with its own advantages and disadvantages. In this article, we’ll take a look at the most common RAID levels and what they’re best suited for.

The first thing to understand about RAID levels is that they are divided into two categories: data protection and data recovery. The main difference between the two is that data protection levels are designed to keep your data safe in the event of a drive failure, while data recovery levels are designed to help you recover your data if a drive fails.

The most common RAID levels used for data protection are RAID 1, 5, and 10. These levels offer different levels of protection, but all three will keep your data safe in the event of a drive failure.

RAID 1 is the simplest of the three, and offers mirroring of your data across two drives. This means that if one drive fails, your data is still safe on the other drive. However, because only two drives are used, this level offers limited storage capacity.

There are many different RAID levels, each with its own benefits and drawbacks. In this article, we’ve taken a look at the data distribution and recovery peculiarities of some of the most popular RAID levels. As you can see, there is no one-size-fits-all solution when it comes to choosing a RAID level – it all depends on your specific needs and requirements. We hope this article has helped you understand the differences between some of the most common RAID levels and make an informed decision about which one is right for you.